Zhovtnevyi Palace, where the national team’s training hall is located, doesn’t have central heating. Apparently, the reason is gymnasts are the only ones using the building right now. I checked ZP’s website. It has no concerts or any other events planned. I’m not sure they’ve even got rid of all the consequences of winter events in Kyiv, which also involved ZP. So why did they turn off the heating? Because Deriugina School has a huge rental debt - 700 000 hryvnias (1 dollar = almost 16 hryvnias right now, the currency is very unstable today, I’m just giving it as an example so you could understand how much it is). And also because the management can’t pay either.

Local government claims it doesn’t have any money to help the school (what a surprise). Unless the debt is liquidated, gymnasts will have to leave the place until the end of December.

"You know, we’re not a winter sport. We’re not used to training outside," Irina Deriugina commented.

Girls have to be dressed in outerwear, hats, gloves, scarves, and warm socks (you can see in the video that someone even has house boots) during training. The temperature in the hall is 5°C (41°F).

"I think we always show high results. And training in such conditions is impossible," said Ganna Rizatdinova. "Now we need at least three hours only to warm up. Moreover, working with apparatus, especially clubs and hoops, is unreal, because our hands get hurt. It’s very uncomfortable to practice routines with so much clothes on. But we have no other choice".

I hope you don’t need a reminder that it’s also dangerous for girls’ health, because the risk of getting an injury is much higher, when your muscles are not warm enough. Not to mention the possibility of catching the flu and similar illnesses.

Ending with the usual talk about awful conditions of the hall and lack of funding for rhythmic gymnastics.

Another cry for help from Deriuginas. I wonder if anyone hears it this time. 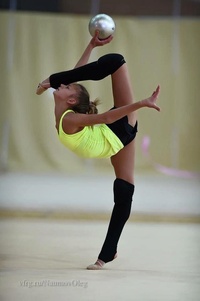